Madonna puts Deadmau5 in its place 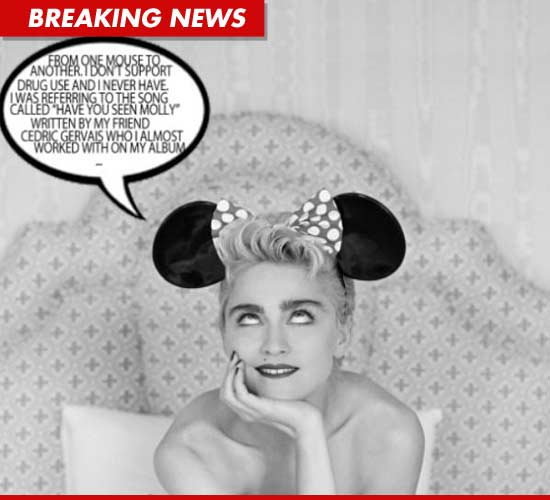 From TMZ:
Madonna says DeadMau5 is DeadWrong ... claiming she was NOT promoting drug use at a concert in Florida ... despite allegations she used her stage time to glamorize the drug ecstasy.

Deadmau5 -- one of the most famous DJs in the world -- had attacked Madonna as a "f**king idiot" for asking the crowd at the Ultra Music Festival if anyone has "seen Molly" -- Molly is a slang term for the active ingredient in ecstasy.

Now, Madge is lashing back ... with a pair of mouse ears.

The Material Girl posted a photo of herself in Mickey Mouse gear ... with the caption, "From one mouse to another I dont support drug use and i never have. I was referring to the song called "Have You Seen Molly" written by my friend Cedric Gervais who I almost worked with on my album."

Deadmau5 saw the tweet and replied ... saying, "Fair enough, I was just voicing my concerns as I usually do. +1 respect for clearing it up personally ... regardless, just be a little more aware of what you should represent at EDM events, and I'll watch my mouth."

Madge replied ... "Communication is always best. You should have called me first, we could have cleared it up 'privately.' ;) See you on the road."

Wait wait wait, I hope you saw this part "regardless, just be a little more aware of what you should represent at EDM events, and I'll watch my mouth."


Why would Madonna carry herself differently at some "EDM" (Electronic Dance Music) event than anywhere else? Deadmau5 you just got caught being a super-huge douchebag and now you're trying to save face.


This cocky prick must really think his "EDM" shows are god's gift to E-tards. Jesus christ man you just steal other peoples' music and do weird shit to it on a computer, just shut the fuck up. Oh and saying "+1 respect" makes you look like a fucking idiot also. I've never seen a loser of the week keep up their loserdom for two days in a row, maybe we have our first loser of the month, who knows.
Posted by Hodge at 11:47 AM