Alright I'm going to do this rapid-fire style.

This is basically all the knee-jerk shit from week 1 put into perspective. 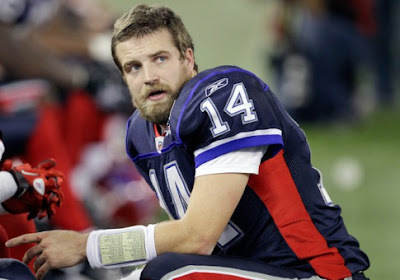 The Bills quarterback Ryan Fitzpatrick crushed the shit out of the Kansas City Chiefs. Now all you need Buffalo is a team to put around that guy. Not a franchise QB my ass.

Usually the best games of the year are the Ravens vs Steelers games. This week the Ravens stomped the living shit out of the Steelers. It was pretty sad really. The smash-mouth match-up had Pittsburgh getting smacked in the mouth all over the field. They'll be okay though obviously so don't slit your wrists yet Steeler nation.

Cam Newton was beastly in his NFL debut, setting records and shit even though his team lost. 422 yards with 2 TD's and 1 INT, not too shabby for a rook. Get used to it Carolina people, Newton will be better than average, and you will still get beaten like redheaded step-children. Another long year for Panthers fans.

Colts fans, if Peyton is out any longer than a few weeks, you might as well pack it in and become Browns fans.

And with Peyton Manning hurt, Tom Brady showed why he is the best quarterback in the NFL. In the Pats win against the Dolphins Brady threw for over 500 yards with 4 TD's. The game was close towards the beginning, but the Patriots offense played like there was no defense. Just textbook type shit. I smell Superbowl.
Posted by Hodge at 3:00 PM