So Lebron and the Miami Heat lost to the Bucks last night, only to find out Lebron's mama got picked up in Miami Beach by cops for assaulting a parking valet. Classy.

From TMZ:
LeBron James' mom, Gloria, was arrested in Miami Beach early this morning for allegedly assaulting a parking valet at the famous Fontainebleau Hotel ... this according to law enforcement. 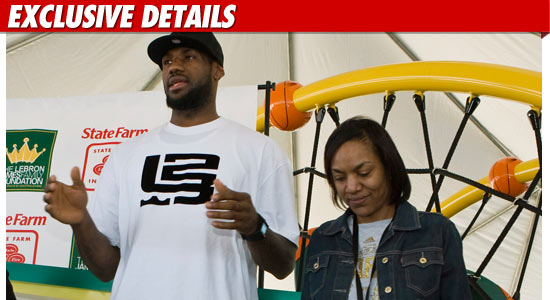 Hotel sources tell us ... Gloria was partying at LIV nightclub with some of her girlfriends earlier in the evening ... but when she tried to leave the hotel, she got into an altercation with one of the valet parking attendants.

We're told Gloria allegedly assaulted the valet. Cops received a call about the incident at 4:47 AM. Gloria was eventually arrested on suspicion of misdemeanor assault. The valet was not arrested.

We're told Gloria has been released from custody.

Gloria has been in trouble with the law before ... having been arrested in 2006 for DUI in Ohio.

LeBron was in Miami last night -- where the Heat played the Bucks ... and lost.

A rep for the hotel confirmed the incident ... but had no further comment.

Why the fuck was Lebron's mom leaving the hotel at five in the morning? Suspect as anything. I guess "earlier in the evening" means she partied all fucking night and wanted to drunk drive to get some breakfast in the morning. Who the fuck knows. All I know is like mother like son, no class.
Posted by Hodge at 12:00 PM