So in an Atlanta nightclub this weekend, boxer Floyd Mayweather was pictured burning a $100 bill. He isn't going to be getting a visit from cops anytime soon about the incident though.

From TMZ:
It appears Floyd Mayweather is getting away with a crime ... law enforcement sources tell TMZ the boxer will NOT get prosecuted for lighting a $100 bill on fire in an Atlanta nightclub this weekend. 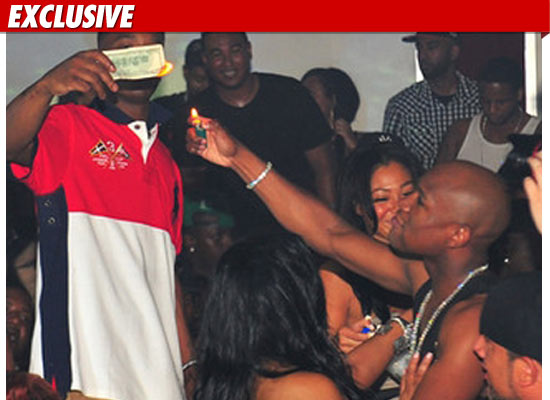 Reps from multiple law enforcement agencies tell TMZ ... it is HIGHLY unlikely for Floyd to be charged with a crime .... with one person telling us, "Try to find a case in recent history where a person was prosecuted for destroying ONE bill. "

An official spokesperson for the Secret Service -- the agency that enforces the money burning law -- had no comment. Ditto for the United State's Attorney's Office.

Alright of course they aren't prosecuting him for burning one stupid bill, who cares it's his money. But in a perfect world, here's how I would give Floyd some justice.

I wish our justice system was more flexible. Floyd should be arrested and go before a judge. If I were the judge, his sentence would be to fight Manny Pacquiao. If he still pussies out, then he goes to prison. How badass would that shit be? Just go get knocked out by a Filipino, or go visit the butt-jockeys in prison. Your choice Floyd.

And by the way, Atlanta nightclubs must be off the hook. You've got Mayweather burning money in his corner, and I'm sure Jermain Dupri was somewhere in the same club. Atlanta is pretty fucking nuts. Ludacris shooting a video on the left. Just out of control nights. Burning money like Floyd.
Posted by Hodge at 12:32 PM