I got this book a few weeks ago from my boy Nick, and once I opened it, I couldn't put the fucking thing down. It is a perfect combo of easy-to-read, and hilarious. I'm all about it.

Sh*t My Dad Says is a nonfictional account of a guy and his father. It's kind of written in the same vein as Tucker Max's stuff, except substitute "stories of getting hammered, being and asshole, and treating women like dogs" with "stories of a loving but brutally honest father, talking about life how it really is."

Yes it is funnier than the stupid TV show they made about it. Rest assured.

The book is about 160 pages and it's an easy-ass read. But some of the quotes had me rolling. 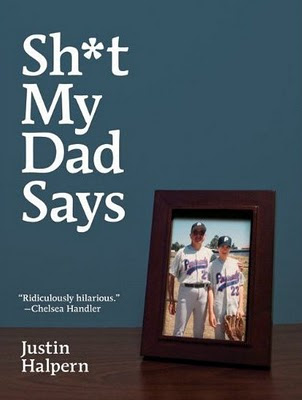 Here are some memorable quotes so you get an idea of how fucking funny this shit is.

"On Puberty
'How's puberty treating you?...How do I know you're going through it? Oh I don't know, maybe it's the three hundred dick hairs you suddenly leave all over the toilet seat that clued me in.'"

"On Finding out I Tried Marijuana
'Pretty great right?...Really? Well we, differ in opinion then. Do'nt tell your mom I said that, though. Tell her I yelled at you and called you a moron. Actually, don't tell her anything. See, now I'm paranoid, and I didn't even smoke any.'"

"On My Interest In Smoking Cigars
'You're not a cigar guy...Well, the first reason that jumps out at me is that you hold it like you're jerking off a mouse.'"

This book is hilarious. Pick it up. There are so many hysterical quotes throughout. The end of each fucking chapter is full of quotes like the ones above that are just the author's dad talking about random shit. Not a single one isn't funny. You won't regret picking this book up. Oh, and if you're a chick, it probably won't be as funny. I'm just saying.
Posted by Hodge at 2:08 PM