Mark Cuban Should Buy the Dodgers

So the Los Angeles Dodgers are in turmoil. Owner Frank McCourt has decided the team will file for bankruptcy. 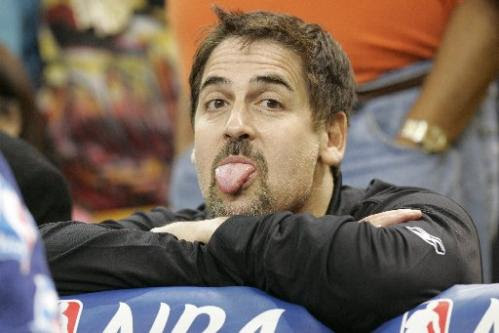 From ESPN:
Team owner Frank McCourt, upset baseball commissioner Bud Selig rejected a multibillion-dollar TV deal last week, now hopes a federal judge will approve $150 million in financing to be used for daily operations and give him more time to seek a more favorable media contract. A hearing is set for Tuesday at 1:30 p.m. (EDT) in Wilmington, Del.

Look, I was listening to Colin Cowherd talk about this the other day. Mark Cuban has expressed interest in owning a professional baseball team, so if the MLB wants to start competing among pro sports, they should allow some young spit-fire owners in the league. Stop being a granpa's league baseball, at least try to stop.

And if the Dodgers go under, the team could go to auction, so Cuban would get a free crack at owning the team, probably for a reasonable price.

From NBC Sports:
A week after his Dallas Mavericks won the NBA Finals, Mark Cuban told TMZ that he’d have interest in the Dodgers, in theory anyway.
“If the deal’s right and they’re fixable, then, yeah, I’m very interested,” he said.

Dude, what is not to like about this deal? Swap out a cash-starved loser in McCourt for a super-wealthy, young and most importantly, smart Mark Cuban. All he said was the team he takes needs to be fixable. Pay the players and some of the debts, and boom, you could have an awesome baseball team in LA again.


This is why I dislike baseball. They turn away young, smart people just because they are young. MLB ownership is like an Elks club. You can't join until you are 80, and no one even cares about joining. That's why when a smart young guy comes, you should let him in Selig.


Don't give me this he's a rebel shit. You know what Mark Cuban is? Good at motherfucking business. Let him have a professional baseball team Bud Selig, you tired old grumpy bastard.