I'm Not Having a Kid

From The Daily:
New moms and dads with visions of Ivy League degrees dancing in their heads should be prepared to face a bill of $422,320 in today’s dollars if Junior heads off to one the country’s priciest colleges as a member of the class of 2034.

If college costs keep rising as they have for the last three decades, the inflation-adjusted price of four years of tuition alone will more than double at private colleges and nearly triple at public universities by the time a baby born this year is ready to enroll, an analysis by The Daily shows.

At those rates, the median price of a year of tuition, fees, room and board at one of the country’s top 10 most expensive private colleges, as ranked last year by Forbes magazine, would shoot from $56,658 to $110,432 by 2034 — the year a baby born this year would graduate — assuming that costs rise at the same average annual growth rate that has prevailed at private colleges as a group for the last 30 years.

Ye-fucking-haw. I'm not having a fucking kid. Are you kidding me with this shit? College is already over-priced and over-rated. If I have a kid he's going to be a fucking plumber and go to trade school. I'm sure even that shit will be like $50k by the time 2034 rolls around. Might as well just spend the money on myself instead of some little ungrateful shit-spawn.

And forget about books, those fuckers will be like $500 each. 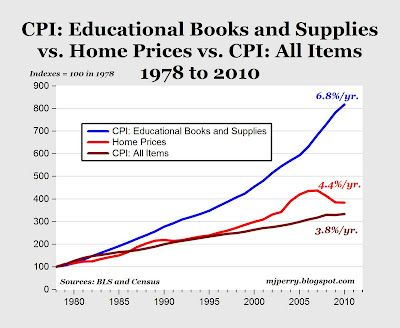